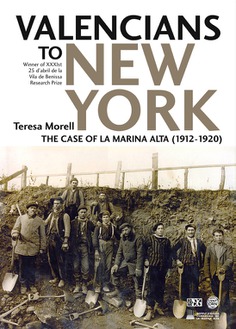 PAPER EDITION ONLY SHIPMENTS TO SPAIN

Among the millions of Europeans that entered the United States through Ellis Island, at the beginning of the XXth Century, were 10,000 Valencians (nearly 50% of the male population) from the county of la Marina Alta in the province of Alicante, Spain. This extraordinary and unrecognized migration phenomenon, which occurred between 1912 and 1920, is the focus of Valencians to New York.

Besides the reasons behind this impressive emigration, the first part deals with what it was like to obtain the needed documents and tickets, to travel on a transatlantic ship, to enter the U.S. through Ellis Island, to live and work hard at their destinations (Lower East Side, N.Y.; Bridgeport, Shelton, New Britain, Waterbury, Conn.), as well as the consequences of this circular migration. The empirical study of the second part is based on the data found in the Ellis Island archives. In the Appendix, thanks to the on-line passenger and ship databases provided by the Statue of Liberty-Ellis Island Foundation Inc., are found the names and personal details, the towns of origin and destination, and the ships and ports of departure, of 2500 Valencian emigrants of the 33 towns of la Marina Alta.